We have recently been in the World Plastic Surgery & Antiaging Confrence in Paris where we witnessed a brand new technology in the field of non surgical (non invasive?) fat reduction. This is the so-called Cryolipolysis.

It is the non-invasive treatment for localized excess fat reduction from certain body parts. It uses a technology that has already been developed since the last decade and is based on the adipocytes destruction by applying controlled cooling on them.

Where is Cryolipolysis based on?

The localized fat reduction technique by the use of Cryolipolysis is based on the scientific observation that adipocytes have different tolerance to cold, in contrast to superficial skin cells and in general, to other tissue cells.

More precisely, we now know that adipose tissue cells when exposed to temperature near -9OC, are killed and fall off. Contrary to adipocytes, the rest of body cells (such as skin cells), require even lower temperatures to be killed.

Therefore, if we succeed in cooling skin to -9oC, then we provoke apoptosis of the adipocytes without severely damaging skin cells.

The Cryolipolysis machine has 5 different heads which are applied depending on the localized fat area that we want to operate in.

Those heads look like vacuum suction pads which suck the part of localized fat and lower its temperature near -9oC. 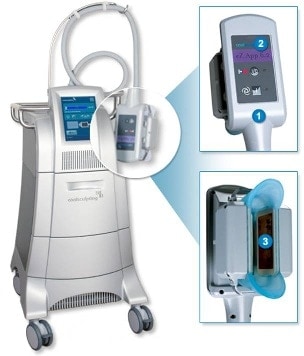 Who is the ideal candidate for Cryolipolysis?

The ideal candidates for Cryolipolysis are men and women with severely localized lipodystrophy in particular body parts.
This means that if someone has small quantities of localized body fat, observed on the laterals of the belly, in the hypogastrium, in the “saddlebags” or knees, then by applying Cryoplipolysis, they can improve the situation of those areas.

In case of several areas of localized fat, such as in: